Nikifor Krynicki (actually Epifaniusz Drowniak) was a Lemko, that is a Russian Highlander, a Walachian. Wallachians came to Poland through the arc of the Carpathians from the lands of today’s Romania, so walking and running is in their blood! As for a true Wallachian, Nikifor could also call himself an ultra runner, because just after World War II, he took part in the Wisła action and was deported three times from Krynica to the regained territories (Western Poland – Legnica) and three times he came back to Krynica… on foot. The third time they gave a break and let him stay! So if you start in Krynica three times, all your sins will be forgiven… forever! There is one problem though and its name is Lackowa!!! Three exclamation marks are not accidental in this case. Write it down well and remember because you will learn remember it well. You will curse around for multiple times while climbing to its top! Fortunately, your sins will be forgiven already in Bieliczna during a visit in an abandoned church. Finally, to soothe your battered nerves and strained strength you will taste the wonderfully refreshing water in Tylicz. Of course we do not forget about skiers. There will also be ski lifts on this route, but they will go in the opposite direction. With the wind in your hair and with a song on your lips, you will run down from the top of Szalony, through Parkowa straight to the Pump Room on the promenade! 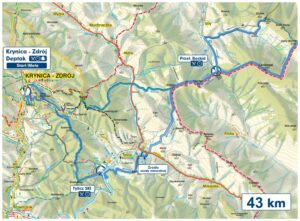 The final obligatory equipment may be subject to change based on the expected weather during the competition and will be announced at the technical briefing on 03rd September 2021. The organizer reserves the right to check the obligatory equipment at any time during the competition. For lack of one item a time penalty of 30 minutes will be added, for lack of two items a time penalty of 60 minutes will be added. In case of missing three or more items a competitor will be threatened with disqualification.